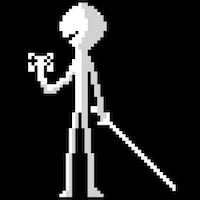 The only game mode planned for OverGem is King of the Hill.

Within the time limit, players must capture the OverGem by being the only warrior standing in the capture zone.

Other players will not make it easy for you, at all. They will smash and bash you off point and take your OverGem! Last player having control of the OverGem wins the match.

You might be wondering why I have chosen King of the Hill over classic brawler elimination mode, one that is pretty much default for other games like Rivals of Aether or Super Smash Bros.

I chose King of the Hill because it works better with the bounce mechanic (my hook). Classic brawler elimination allows for players to be knocked out of bounds. This would mean that the levels in the game would not be enclosed. It would not have given the bounce mechanic a chance to 'strutt-its-stuff', as there is not as much surface platforms to bounce off. So I decided to enclose the levels for OverGem, increasing the bounce frequency!

Of course, I could still have implemented a health system and did elimination through health reduction. But, when I tested the game mode with friends, one feedback that stuck with me was that they liked King of the Hill because they did not have to wait after being eliminated, especially if those that are left in the match are equally skilled and are taking a while.

For these reasons, I decided to keep King of the Hill as the default game mode. There is actually another less important reason, which is that it makes sense in the context of the 'lore' behind OverGem. But, what do you think? Is King of the Hill a rare take you'd like to try out for a multiplayer action platformer?